Why I unexpectedly adopted a senior dog and whether I'd do it again.

Never in a million years did I think I would adopt a 10 year old dog.

My home already housed myself, my husband, my 2 small kids, and 4 pets, all of whom have a unique story:
1. Buddy, dog age 15 (a wary feral dog I adopted at the age of 9 months in 1999 after deciding no one would ever adopt him)
2. Kitty, cat age 14 (adopted in 2000 at the age of one. Chosen not only for her sweet demeanour but because she had overgroomed all of the fur from her legs and tail from stress. I just couldn't leave her!)
3. The Bun, rabbit age 12 (adopted in 2002 at the age of 7 months. She bit like a vampire and wasn't a cute "baby" anymore, someone had to give her a chance!)
4. Kermit, cat age 7 (adopted in 2005 as a kitten. My friend Jen was fostering a litter and Kermit's back hips were not fusing so he couldn't walk properly. Everyone in the litter was adopted except for him. I went to visit him and keep him company one day...and ended up adopting him!)

I've always known that my pets had one thing in common: they all had special issues that drew me to them. But until recently I didn't realize they had one more commonality: they were all young when I adopted them.

So, why adopt a senior? Here's my story:

It all started in December 2012 when Walks 'N' Wags ran our first annual national Holiday Charity Drive. In Vancouver, I approached my colleagues at The Pet Shop Boys to see if they wanted to work together to benefit SAINTS Rescue. SAINTS is a senior rescue based in Mission BC. The facility is beautiful and gives senior animals a chance to live out the final chapter of their lives surrounded by love. Some lucky pets are even adopted out by those wanting to bring a senior into their lives.

The Charity Drive was successful beyond what we could imagine! After picking up all of the donation items from The Pet Shop Boys, I drove with my husband and 2 children out to SAINTS with the goods. They were holding a tour that morning and we happily followed volunteer "Laura" around the facility "ohhhing" and "awing" at all of the sweet animals. In the bedroom was a gang of little dogs, all of whom looked to be about 100 years old. They were adorable! When I sat on the bed to say "Hello" to them, one chubby black and white Chihuahua X sat down beside me, leaning into me and giving me several big kisses. I had my husband take pictures of us together. 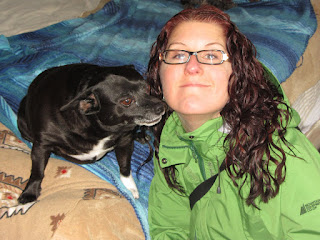 We got into the car and started talking about our visit and I brought up the little Chihuahua X. You see, my husband and I had been discussing adding a new dog to our family for awhile. Buddy, my "Pet First Aid demo dog extraordinnaire" was in his twilight years and although he still joined me in Pet First Aid classes, I could see he would soon be ready to retire. My husband had always only wanted one dog so I figured I needed some "legitimate" reason to hit up for a second dog! So I had been working on him for some time. Having said that, our lives had changed since we adopted Buddy. We now had 2 small kids added to the mix and 4 other pets. We couldn't add just any animal that I fell in love with to the family, it had to be just the right one.

So...I tread lightly on this one. "He was sure a cutie hey?". "I wonder how old he is?". "He looked so young and perky to be a senior!". "He seemed pretty friendly I bet Buddy would like him!" And finally: "Maybe we should see if he is up for adoption?" We looked online as soon as we got home. PetFinder said the little guy was named "Joey" and that he was 4 years old. Perfect! A friendly adult dog would be a great fit in our house. I read on to see that Joey also "came with" a second dog (age 10) who he'd lived all his life with. Yikes! Unfortunately I could not invite 2 dogs into our home.

I contacted SAINTS to ask why the dogs came together as a package. Was it important not to split them? That's when I got the REAL news, that the PetFinder link was grossly out of date. Joey was actually now 10 years old, not 4. His companion Peluchi was now 16. SAINTS had taken them both in when Joey was 3 years old when their original family had moved away. They were adopted out together when Joey was 5 but returned a year later when Joey was deemed to have a peeing problem. For the last FOUR years they had both lived with the kind folks at SAINTS. I was told that although SAINTS had been trying to keep the dogs together, Joey was now much more active then his very senior counterpart. Apparently they didn't spend much time together anymore. We could adopt Joey but if he became depressed he had to be returned. And I had to understand he had a peeing problem that would not go away. Oh, and I was reminded of course that he was 10 not 4!

My thoughts, "A 10 year old dog? I already have a 15 year old dog and 14 year old cat, do I want another senior?". My husband worried it would be hard on the kids to potentially lose 2 dogs within a reasonably short time. And of course, can we afford the Vet bills for all these seniors? What about the peeing problem?

For two days, we discussed all of these issues amongst ourselves and with our 2 small children. At the end of the day, a decision was made. Something about Joey had stood out above and beyond all the others. I had seen many dogs while on international World Vets volunteer trips and in our local shelters and none of them had called to my heartstrings like this little Chihuahua had. Age was only a number. This dog was THE dog. Discounting him based on age would have haunted me forever.

We contacted SAINTS and planned for Joey's pickup. We brought him some treats and he danced a little "goodbye" for Carol, the head of SAINTS (see here) 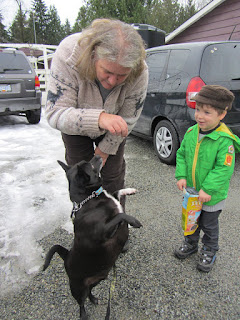 When we got home, Joey was informed that he would now be called "Tux" (picked by the kids, short for Tuxedo as per his colouring).
Tux had many little surprises for us:

1. He walks beautifully on a leash
2. He doesn't shred our furniture! Or shoes!
3. He can be left alone at home without being crated
4. He brings us a toy and dances everytime we get home
5. He burrows in our bed like a frozen mole
6. He gives the best stinky-mouthed doggy kisses EVER
7. He is just plain silly and makes us laugh everyday! 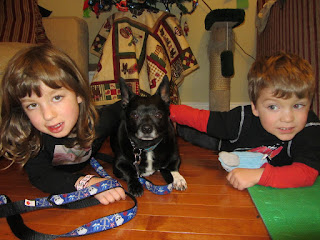 Oh, and did I mention he never got depressed? And that he has peed inside only twice in 36 days? And that despite being a chubby guy he was diagnosed with Hypothyroid and is actually quite athletic? He's already happy but is also well on his way to being slim and healthy too! 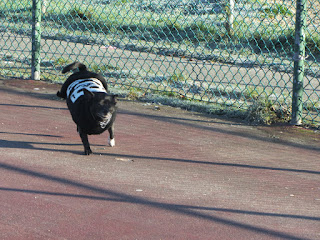 Never once have I questioned our decision. Nor has my husband. In fact, we've wondered what we did without Tux all these years! 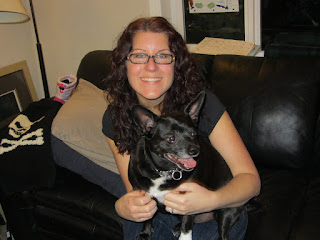 Would I do it again? In a heartbeat!